On this hour of Cruise Control with Fred Staab and Les Jackson
Refund and Recalculation : Ford re-rates the MPG on its popular CMAX Hybrid and offers up some cash to customers.. And there's a redesign for 2014 to regain miles per gallon. 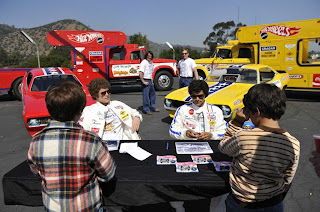 Talking Tech: Volvo is set to squeeze over every bit of power from its all new four cylinders.
Subaru tests for pet safety and the first results are shocking.

Listen live Saturday August 31st at 10AM Eastern find out how to listen live  CLICK HERE   and also  SUBSCRIBE TO THE PODCAST Its our two hour Corvettes at Carlisle special.


Snake and Mongoose is a new film that is not just about the early days of drag racing and the rivalry between Don Prudhomme and Tom McEwen. The story is much bigger than that, the film also focuses on how the two unlikely figures revolutionized entertainment sports marketing when they attracted Mattel’s Hot Wheels Division to sponsor them Executive Producer Robin Broidy will join us.

Cruise Control airs live Saturday August 31st at 10AM Eastern find out how to listen live. Its our two hour Corvettes at Carlisle special.

Posted by Cruise Control Radio at 9:46 AM